Spaghetti sauces and recipes for weeknight dinners as well as special occasions. 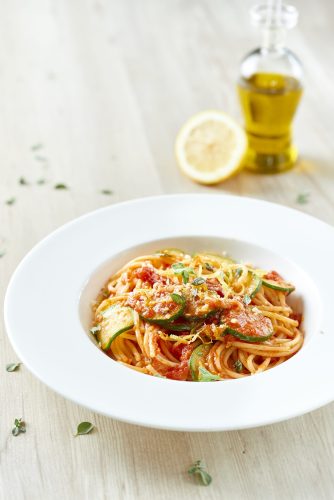 Spaghetti with tomato sauce and courgette

This fiery classic gets its heat from red pepper flakes and its fresh depth of flavor from tomatoes preserved fresh off the vine. Now you can enjoy the taste of summer any time of year. Make the sauce ahead for a super-fast weeknight meal.

This vegetable bolognese recipe creates enough sauce for two dinners for four. We recommend freezing half for enjoying another night.

We will accompany you in the preparation of Tagliatelle Bolognese sauce, a classic of the Italian cousin: that could be the perfect pairing for a wide pasta such as tagliatelle or pappardelle, for a luscious experience with the right balance of flavour and texture.

Spaghetti al Pomodoro is a traditional Italian recipe, perfect for when you fancy something easy to prepare and packed with flavour. The light pasta dish is prepared with a few simple ingredients, and the freshness of the Pomodoro sauce makes it a perfect treat for a warm summer evening.

This big batch recipe makes enough to serve a crowd and freezes wonderfully. Freeze half right away and serve the other half for tonight’s dinner. Each half of the recipe easily serves six. Slow simmering is the key to developing the rich luscious flavor in this classic northern Italian ragú. Finely chopped pancetta, carrots, celery

Spaghetti Marinara is a classic, simple, and easy dish consisting of a rich tomato sauce and fresh flavors of the sea. Pair the Marinara sauce with al dente spaghetti and enjoy the elegance of this exquisite dish.

Pasta Napoletana is a simple and flavourful Italian recipe, which never lets you down. The rich tomato-based pasta gets its name from the classic Napoletana tomato sauce.

Spaghetti is a staple dish of traditional Italian cuisine

Spaghetti is regarded as one of the most well-known dishes in the world. The long and thin string-like pasta is believed to have originated from Sicily in the 12th century, however, spaghetti established a strong position in Italian cuisine only until the 19th century once spaghetti factories enabled the mass production of the dish to all Italians. Nowadays, spaghetti can be found in most stores worldwide. The reason why spaghetti recipes have become so popular is due to its simplicity; it is easy to prepare, it goes along with a variety of ingredients and sauces, and it is exquisitely delicious.

THE DIFFERENT FORMS OF SPAGHETTI PASTA

Just like pasta, spaghetti is made from grain (e.g. flour) and water. Traditional Italian spaghetti is commonly made from durum wheat semolina. In most cases, spaghetti is created with refined flour, giving the pasta a white color. However, whole-wheat and multigrain spaghetti are also available, which are typically higher in fiber and nutrients.

Dried spaghetti is also a perfect option for pasta lovers. Although it is a commercial version produced in large volumes in factories, dried spaghetti does the job, since it tastes, well, just like spaghetti! Dried spaghetti is essentially simple and allows allow you to prepare an affordable and delicious dish of spaghetti in a matter of minutes.

SPAGHETTI RECIPES AND THE DIVERSE WORLD OF SPAGHETTI SAUCE

There are countless types of spaghetti recipes, which can be prepared with various sauces and ingredients, ranging from meat, fish, and chicken to vegetables and cheese. Typical Italian spaghetti recipes are:

To prepare a mouth-watering spaghetti dish, it is crucial to use the finest ingredients. This is why our tomato-based spaghetti recipes include 100% Italian tomatoes picked when perfectly ripe, guaranteeing a rich flavor of sun-ripe tomatoes.

Browse our spaghetti recipes and sauces, choose one to your liking, and serve up a sensational spaghetti dish.