Peperonata is a simple and versatile Italian recipe containing fresh capsicums. This traditional Peperonata recipe can be enjoyed hot or cold, over crusty bread, alongside meat, or even as a pasta sauce.

Made with Crushed Tomatoes

Mutti® Polpa keeps all the freshness of freshly picked tomatoes. This unique product combines the finely cut pulpy part of the fruit with its own juice. 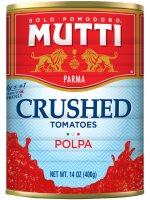 Peperonata can be enjoyed either hot or cold, however serving it at room temperature offers maximum taste and flavour.

PEPERONATA AND ITS MANY FORMS

Peperonata can be considered as fairly unique as only a few dishes use capsicums as a main ingredient. This traditional Italian recipe however has numerous versions and opinions, which vary between the regions of Italy as well as the seasons. Some people might argue that Peperonata is typically prepared with capers and fresh mint. Others maintain that the recipe should include olives, basil and a dash of vinegar. Be that as it may, there is no right or wrong way to prepare this deliciously authentic dish.

What’s more, Peperonata can be served in basically any way you wish; spoon it onto toasted bread, use it as a side dish for meat and fish, or stir it into your pasta or rise. It is also known to be cooked before-hand for summer barbecues.

PEPERONATA with the best italian tomatoes

In our Peperonata recipe, we use Mutti’s Polpa Crushed Tomatoes to add some rich texture and vibrant colour to the dish. The product contains the freshness of hand-picked ripe tomatoes, making it a perfect addition alongside the lush summer capsicums.

Also made with: Crushed Tomatoes